Following Fall Guys: Ultimate Knockout’s launch on PlayStation 4 and Steam on August 4th, we have been incredibly excited and humbled by the positive reception received from the community. With so much rewarding content still to come, we wanted to take a moment to reflect on some truly staggering first week stats, as well as reactions from across the industry press and beyond.... 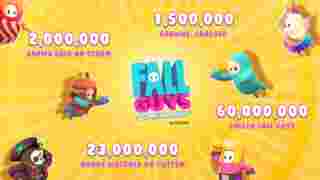 With sales topping two million on Steam alone and tens of millions of hours of Fall Guys fun being consumed on Twitch, our team has been blown away by the scale and speed at which our stumbling pals have brought hilarious chaos to the world.

“It has been overwhelming and humbling to watch the launch and reception of Fall Guys. We're incredibly grateful to all of our players for their support and have big plans for the game in the future,” beamed Mediatonic’s Co-Founder & Chief Games Officer, Paul Croft. “We're thrilled by the response and can’t quite believe how beloved our little jelly beans have already become!”

Our pesky Fall Guys have also been making quite the name for themselves, with some glowing review appearances across the gaming and mainstream press, alike. To date, we’ve seen the joys of ‘stumble royale’ covered by the likes of The Guardian, IGN, Forbes, Wired, Eurogamer and many, many more.

“Once a year, a game is announced. And from the second it’s revealed, I know it will be my game of the year. Folks. This year, that game is Fall Guys: Ultimate Knockout” - Esquire

With so many players vying for success in the inaugural Fall Guys Season, the team at Mediatonic are cooking up plenty of future content to keep players engaged for the long haul, including new levels, game modes and super stylish costumes.

You can jump head first into Fall Guys right now on Steam and PlayStation 4. Remember, Fall Guys is free to PlayStation Plus subscribers for the month of August!